When you hear the term ‘psychological pricing’, it is charm pricing that probably comes to mind. Charm pricing is the practice of selling products at, say $1.99 rather than $2.00. You see these prices everywhere—bricks-and-mortar stores, online shops and within mobile apps.

Why does charm pricing work? The reason is the way that people recognize the magnitude of numbers. They read a price left-to-right, starting with the first digit. So, for $1.99, they first read ‘1’ and that frames the magnitude in their mind. That’s the theory.

But, charm pricing might not be suitable for all audiences, as Moonlit Wang and Tammy Levy warn:

Consider charm pricing but remember it doesn’t work everywhere. For example, in the United States, prices always end in $x.99, but that’s not the case in Japan and Korea, where rounded numbers are used. Pricing in accordance to the local norm signals to the customers that you care and designed the game with them in mind. The Google Developer Console now automatically applies local pricing conventions of each currency for you.

There’s No Choice for iPhone Apps, Since Apple Restricts You to Their Pricing Matrix

It’s worth mentioning that the charm pricing debate doesn’t really apply to iOS apps. That’s because iPhone and iPad apps must price according to Apple’s pricing matrix. For each in-app purchase you create, you must select a single price tier that covers all regions.

Note that Apple prefers prices ending in 99 in the United States, and similar endings for Euro and Great British Pounds. But, they do not use charm pricing for the Danish krone, where users would see it as unusual. This is in line with the warning from the Android Developers Blog, above. 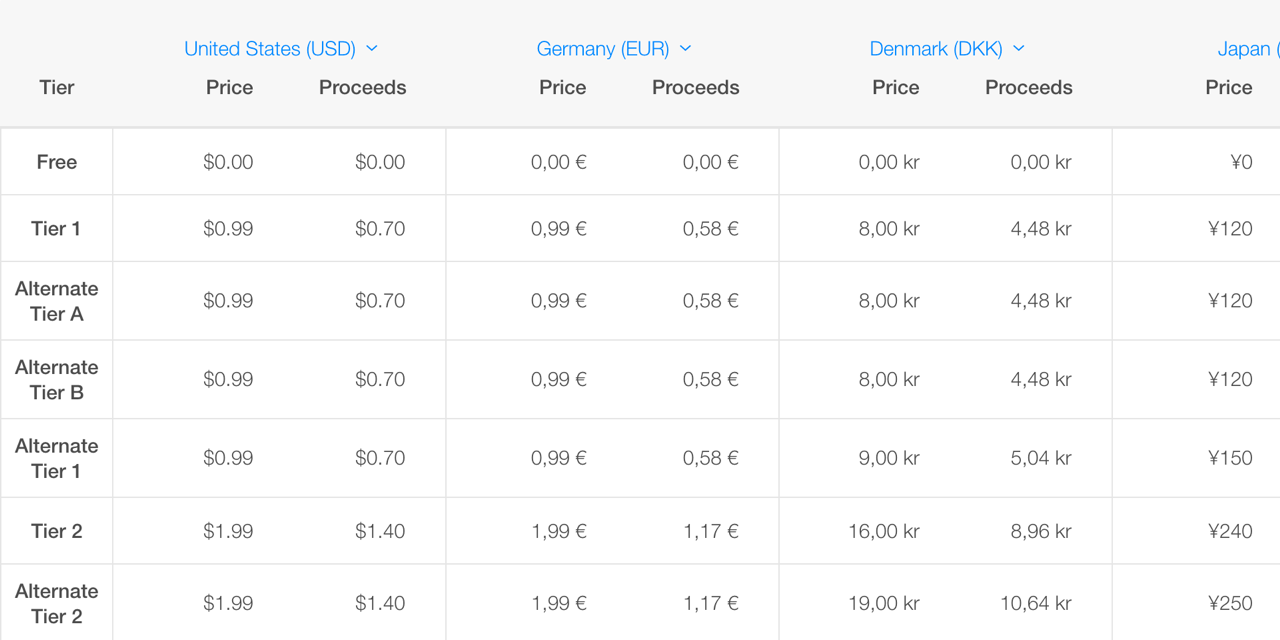 Google Play, on the other hand, allows you to specify arbitrary price points. Rather than choosing between $0.99 and $1.99, you can price your content at $1.73, if you wished.

Google also provides a simple form of segmentation allowing you to price your products by region, whereas Apple restricts iOS apps to price tiers covering all regions. You cannot, for example, use ‘tier 1’ for region X and ‘tier 2’ for region Y. Instead, you can use a tool like Sweet Pricing to achieve this form of segmented pricing.

So when it comes to the charm pricing, our practical concern is with Android apps, where we have the freedom to set our own prices. In any case, it would appear that charm pricing is a wise strategy.

Price anchoring is another psychological pricing technique. It makes a price appear more favorable, by putting it in a context of higher prices or comparable products. Or, in the words of Ryan Donaldson, “anchor the user with a really steep price on one item, and offer a different one for what seems like a great bargain when compared to the first. Sales on that second item will increase.”

If you sell a virtual currency in-app, you probably sell multiple bundles of various sizes. For example, you might sell 1,000 coins at $1.99, 2,500 coins at $2.99 and a number of other bundle sizes. The most obvious price anchoring technique is to show these bundles side-by-side, because the player will see the $1.99 price point as lower than the $2.99 price point.

In fact, it is often best to order your bundles from highest price to lowest price. If the player sees your $79.99 bundle first, the $1.99 bundle will seem like a good deal, even though the $79.99 bundle might represent better value.

There’s an interesting piece of research that any high number (not even a price) can act as an anchor, which might explain why it is better to sell larger bundles of coins. 1,000 coins at $1.99 seems somehow better value than 100 coins at $1.99.

The final anchoring technique concerns discounted pricing. If your in-app content is on a promotional offer, you should show the previous price first. That anchors the user to the higher price, which makes the new price seem a relatively better deal.